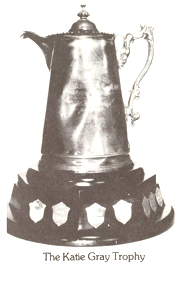 Picton held on Labour Day Weekend. The trophy was originally called the Robertson Trophy and it was presented for the first time on July 13th, 1878 by Alex Robertson, the first mayor of the newly declared "City of Belleville" to the yacht Katie Gray during the Union Regatta held on Big Bay.

The yacht Katie Gray was designed and built at Cobourg in 1875 by Captain Alexander Cuthbert for Mr. W.H. Campbell, Fire Chief in Belleville. The Katie Grey had a 27 foot keel, 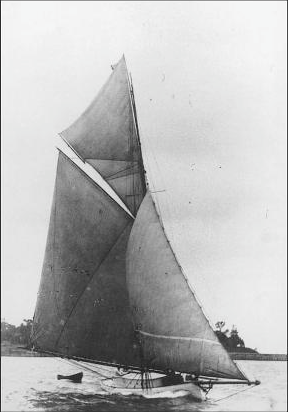 a beam of 10 feet 6 inches and weighed ten tons. Sail inventory consisted of a mainsail, topsail, staysail and jib topsail. She carried 2,000 pounds of ballast of which most was moveable. The moving of ballast was not permitted during local races but was allowed in races at the Royal Canadian Yacht Club. She carried a large number of Quinte boulders and an army of boys to carry the boulders to the windward side whenever the yacht tacked during these races.

The Katie Gray sailed the waters of Lake Ontario for 62 years and brought home more honours than any other yacht of her time.

Her maiden race was the Dominion Day Regatta at Belleville on July 12, 1875 when she defeated the best of the local fleet.

The fame of the Katie Gray soon spread and the public keenly followed the local racing scene. (It was also said that interest was such that considerable sums of money were won and lost on the results of these races.)

Her most famous race was a match race against the "Ella" of Oswego held at Kingston on July 15, 1879. The race was sailed over a 35 mile course and the Katie Grey won by 13 minutes, taking the purse of $250.

The yacht was purchased in 1882 by Ross Cummings of Trenton who sold the yacht that same year to W.B. Phelps of the Oswego Yacht Club. After many years of successful racing she was retired and used as a cruising yacht by the Phelps family.

Around 1910 the Katie Gray returned to Belleville, purchased by Captain A.A. Bartlett. She spent some time on the bottom of the Bay of Quinte but she was subsequently raised with the help of the schooner "Lyman Davis". Her ballast was removed and the boat was raised to continue her sailing on local waters. She was often seen sailing on the Long Reach with Captain Bartlett at the helm and his crew, Lassie, a scotch collie on the cabin deck sniffing the wind.

The Katie Gray ended her illustrious career on the banks of the Napanee River, as seen in a photo taken in 1937. It is assumed that this was her last resting place.

NOTE: A special thank you to Past Commodore Dick Bird, whose booklet "History of the Katie Gray" was a valuable source of information. Several copies of this booklet (which contains a detailed history of the Katie Grey and her racing career) have been left at the bar for members who might wish to borrow it to discover more about the Old Days of Yachting on the Bay of Quinte.