America’s Cup Jubilee Regatta, 1851-2001
Celebrating the 150th Anniversary of the World’s Oldest and Most Famous Sporting Trophy
Cowes, Isle of Wight
August 18 to 25, 2001 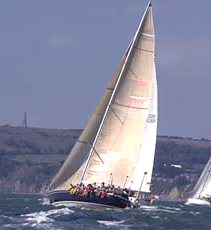 A Snapshot of BQYC at this Event! 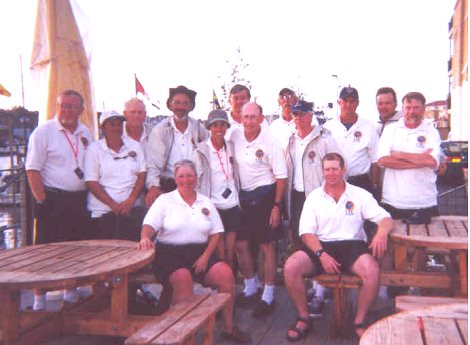 Here are some of the excerpts from the racing as sent in by Anthony:

Our crew surpassed themselves in the first race;   many of the yachts that we beat were crewed by internationally famous yachtsmen; Yeoman of England was one, sailed by Aisher, a previous two time winner of the Admirals Cup, and there were many such others.   The conditions were right on the limits of acceptability; wind  30/35 knots, 6 foot waves and a tide running at 4 knots. Several yachts were dismasted and two ran aground trying to beat the tide.  At one point when under spinnaker we spun out and had the yacht with the end of the mast almost touching the water,   nobody fell overboard and within about 30 seconds we had everything under control and were racing again.  On the final run to the finishing line we were the only boat to have it's spinnaker up!  Also we were fouled by the Russian National crew who blatantly disregarded rule 10....port/starboard and then when we had to duck them to stay alive they tacked right on top of us and even though they were windward boat, they refused to give way, We lost  minutes in that encounter. We could have placed at least 4 or 5 places higher had that not happened.

The 12 metre and modern America's Cup Class canceled because of the weather.

Our skipper Anthony at the helm 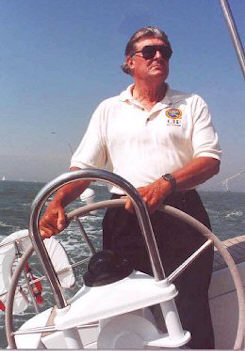 Today's result was not as good as yesterdays; we finished just in the second half of the fleet.  Rather a disappointment to all, especially as for the first three hours we were up with the leaders group and our position in the fleet was in the top 15 or better. The weather was much more benign today...wind 25 knots, flat water but the tide still running at 4 knots.  It all came undone after a spinnaker run during which we decided to change the headsail for the next upwind leg.  We were in a bunch of 9 yachts and we were the front of that group. After the mark rounding when the headsail was being raised it came adrift from the forestay; the sail was lowered and rethreaded and during all the headsail change the genoa halyard became   crossed with the spinnaker halyard which resulted in the genoa having to be lowered again. When it was finally properly raised and was being sheeted in the genoa sheet parted from the clew so we had to put in a tack to get it in position to be retied. All of this happened in a distance of about 400 yards   While we were otherwise occupied the yachts that we had been dueling with all sailed off into the distance.  We managed to close the distance quite a lot but not enough to make a difference to the final result. 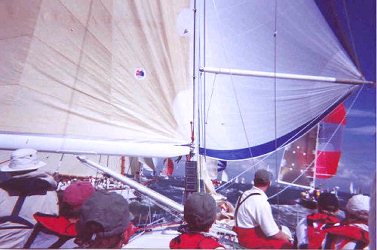 Many of the yacht skippers in our division are taking quite an interest in our campaign and have nothing but praise for our efforts, particularly since we are on a chartered yacht. Quite a few have commented on our crew composition...3 ladies, 4 men over 65, 3 around the 60 mark and the youngest over 40. They point out that their crews are generally in the mid twenties and wonder how we are achieving such good results with our crew. 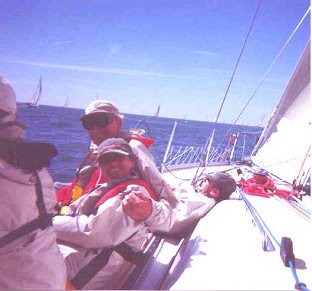 Of particular significance is the fact that one of the top racing yachts in the Solent  "Yeoman of England" skippered by David Aisher, a two time Admiral's Cup winner is only just ahead of us in our class. 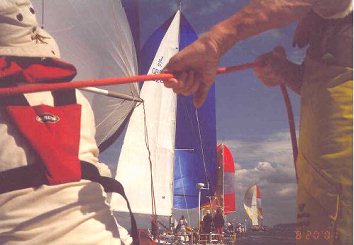 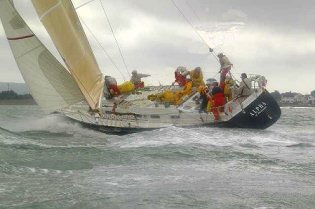 First Race Day.  Dump the main and hang on! 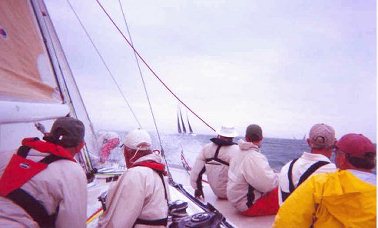 The Around the Island Race  was one of the most memorable sailing experiences ever.  With all yachts sailing the same course we, our class comprising the smallest and slowest, started first. {50 ft to 70 ft is considered small!!}

Everything went very well for the first two hours until the genoa halyard broke. The sail was quickly dropped and connected to a spinnaker halyard and we only had two yachts pass us during the change. 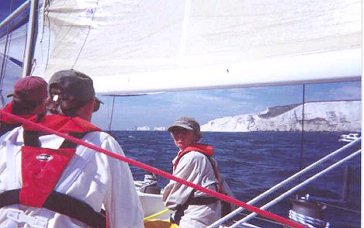 Approaching the chalk cliffs by the Needles

Going clockwise around the Island we stayed close inshore until passing St.Catherines lighthouse when we set course for the Needles. At this point the fast yachts started passing us. First was "Stealth" the Italian design which came screaming past only 50 ft away doing what must have been in the region of 15 knots plus. After that we were more slowly overtaken by the old America's Cup class and then the fun really started! 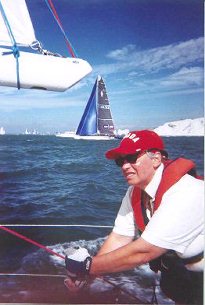 Coming up to the mark at the Needles we saw the new   British IACC yacht  GBR  closely pursued by the Italian Luna Rossa from the Prada stable. This is where it got really interesting...GBR passed us with about 200 yards to the mark, Luna Rossa was slightly wider but astern of us. Within two boat lengths we were on starboard with our spinnaker up and no overlap from Luna Rossa and we could, if we chose, have put Luna Rossa wide of the mark allowing the British yacht to increase its lead. Congregated around this jibe mark were at least 500 spectator boats, umpteen press and television boats and no less than five news helicopters filming the mark rounding of the Needles.  Unwilling to be the cause of press reports on how we gave an unfair advantage to GBR by forcing Luna Rossa away from the mark, we gave way allowing Luna Rossa through. Their helmsman de Angelo gave us a gentle wave as he passed us acknowledging our concession.  Then with us just a few feet   behind Luna Rossa and in front of all of the cameras and spectators our crew carried out a classically perfect spinnaker jibe around the mark.

The next bit is called in British yachting terminology, especially in the Solent  STUFFED BY THE TIDE. Coming through the Hurst point gap the tide was running at 5 1/2 knots against us. Heading east we had two options, stay on the north shore of the Island where the tide was strongest but with much better wind and try to avoid the strongest flow by staying as close inshore
as possible OR sail across the tide to the mainland shore where the tide was weakest but so was the wind. Half the fleet went one way, half the other.  We crept inshore as close as possible, at times sailing through anchored spectator yachts, hotly pursued by our two main rivals who have always been within a few
boat lengths of us and each other throughout all of the races so far.  The yachts that went to the mainland shore got better wind and sailed away from those on the Island shore.
We finished a disappointing 28th and only touched the bottom once!
Our overall position in the Around the Island Race was 94th out of about 150. 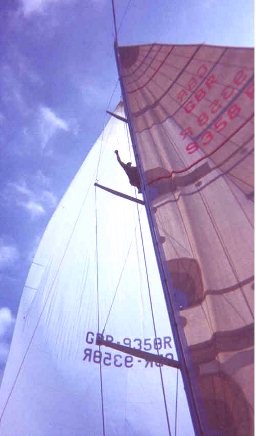 Richard does a repair job!

It is unlikely that there will ever be such a regatta again.  It was an experience of a lifetime and the crew were honoured to represent BQYC, and Canada, at such a great International sailing event!